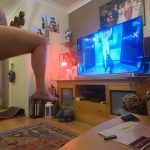 Now I’d seen that British Naturism were advertising a number of events on their website, and thought to myself, why not. I can’t get to the gym at the moment, I’m not paying my monthly fee, so for a fiver, I thought I’d give it a go.

I set my computer up so that it could mirror the screen on the big TV, so I could easily follow the instructor more. I didn’t realise the work out was going to be on Zoom until 10 minutes before the event, so wasn’t fully prepared.

When I synced it with the TV, the volume was ever so quite on the MacBook and was not coming through on the TV. I could barely hear the music, but could easily follow the instructor on the big screen. Maybe it was because I was sharing the screen that a setting had been triggered to reduce the volume (who know’s, but I’ll be more prepared next time).

Before I knew it the class had started. Think it was me and a handful of other blokes who had signed up to the class, didn’t see any other women there, which isn’t a surprise I suppose. One thing I was surprised at though was the amount of sweat pouring off me after completing the 45 minute exercise class.

The name of the class was GroovX Stix. It was an upbeat workout with the use of drumsticks or other similar utensils you could find round the house. I opted for the wooden spoons. I started off with my exercise mat on the floor, but soon realised this was going to be more of a hinderance than help, so pushed this out of the way. It was now just me, two wooden spoons and a rug protecting the floor.

Boy did the sweat pour off me, and probably for good reason. Working out naked and trying to film it really did highlight to me how much weight I’ve put on over the lockdown period. I am now 2 stone heavier from when I was at my lightest when we were members of Slimming World, and I didn’t like what I saw. The overhang on my belly is HUGE, and is not something I’m proud of.

Will I be doing the Naked WorkOut again? The jury is out on that one but I do know that exercise clothed or unclothed is now on the agenda, especially with the lighter nights on the horizon.